The US Open. The last Slam of the year. What could possibly go wrong? It’s not like players are dropping like flies or anything……..never mind. The list of players who have withdrawn from the final major reads like the credits from a star-studded blockbuster:

Serena Williams (pregnant and just gave birth to her daughter on 1 September. Her coach says she’ll be back on the court in January……apparently)

Victoria Azarenka (custody dispute with her ex over her son)

But hey, at least Maria Sharapova is back (!)

It would also appear that the tennis world has found it’s new darling: Denis Shapovalov, 18 years old, Canadian (just saying) and currently slaying on hard courts. He’s beaten both Nadal and Juan Martin del Potro this summer, yet the US Open organizers didn’t give him a wild card. Instead, he played his way through qualifying to get to the main draw. Not bad for a kid who, back in the spring, was making headlines for hitting a chair umpire in the face with a ball and being slapped with a 50K fine. Did I mention that he’s currently ranked 69th in the world? #gocanada

As usual, the women’s draw is wide open with 8 players all in contention for the No. 1 ranking. There’s no clear-cut favourite here, although 3rd seed Garbiñe Muguruza would be at the top of the list after her Wimbledon victory last month. Never count out Venus Williams either, especially not on home soil, plus being a new auntie might bring a little something extra to the table. Current top seed Karolina Pliskova is always dangerous and with the return of Maria Sharapova, its not too far-fetched to say that she could make it to the final.

The men’s side of the draw is all a bit……………mad. As a tennis fan, I’m apocalyptically miffed at the fact that we have all been robbed of a Nadal-Federer finals showdown. Instead, it will be a semi-final matchup. Which if you ask me, is just not the same, especially considering that the person on the other side of the draw isn’t Djokovic or Murray. Never in the history of their rivalry have Roger and Rafa played each other at Flushing Meadows, so their impending (barring any unforeseen catastrophes) semi-final will be the first time the two have met under the lights on Arthur Ashe. While this is all very well and good, it still would have been a thing of wonder to see them in a final here. Now, we’re only guaranteed one of them in the final. Personally, I hope its Rafa, so the two can split the Slams between them and all will be well with the world. Unless, of course, you’re a male tennis player, in which case its a case of deja vu.

But who, you may ask, is responsible for this Finals robbery? None other than Sir Andy Murray himself. As we are all aware, Murray has been suffering from a hip injury since before the French Open and gamely limped around Roland Garros and Wimbledon before withdrawing from Cincinnati. Here’s the kicker though: he held out as long as possible before withdrawing from the US Open and his eleventh hour withdrawal meant that the men’s draw couldn’t be amended, meaning it was too late to bump Federer up to the no. 2 seed and into the opposite draw from Rafa. Apparently, in tennis 48 hours is too late for this sort of malarkey. This all means that one of the finalists will be either Roger or Rafa and the other one will, in all probability a first-timer. While this may seem terribly exciting, it is, instead, just a teeny bit underwhelming……….

Day 1 in Flushing Meadows started out started out quietly. Kind of. Or at least it did on the men’s side. As per usual, the women’s draws gave us upsets, 4 in fact, nearly from the outset. Britain’s Jo Konta was ousted by Serbian Aleksandra Kunic, and if you thought that was the upset of the day, surprise!- it wasn’t. That actually belongs to Maria Sharapova who ousted second seeded Simona Halep under the lights on Arthur Ashe Court. If any first round match was the most difficult for a seeded player it was this one. In Sharapova’s first major tournament back after her doping ban, the question was how well will she perform and is she still good enough to compete? The answer on both counts was definitively yes. Let’s not forget that Sharapova has won Grand Slams before, including the US Open. Doping ban aside, she was at one point the best women’s player in the world……..you know, before Serena took it back.

One feels for poor Simona Halep who so far this season has had a French Open prised from her grasp by then-unseeded Jelena Ostapenko in Paris and then lost in the quarterfinals at Wimbledon by homegirl Konta. In fact, New York was a mirror image to Australia, as she was defeated in the first round in Melbourne by American Shelby Rogers.

Day 2 was a washout, except for those lucky enough to be playing on Arthur Ashe under the retractable roof. Most matches were either delayed until Wednesday or suspended. Day 3 was obviously spent playing catch up. But Federer and Nadal were both in action. Rafa played a hard match against Serbian Dusan Lajovic while Federer, on Day 3, had to slug it out in 5 sets against American Frances Tiafoe. The rumour mill has been swirling that Feds’ back has been giving him some problems. Nonetheless, there were upsets aplenty, Day 2 saw Sascha Zverev and Nick Kyrgios fall by the wayside, which is a shame as Zverev was tapped to be a contender after the withdrawals of Murray et. al. He fell at the hands of Borna Coric (you may remember he upset Andy Murray way back in the clay court season) while Kyrgios was his typical, turbulent self, succumbing to his countryman John Millman after injuring his shoulder.

It was another massively underwhelming tourney for former world no. 1 Angelique Kerber who was dispatched in the first round by Japan’s Naomi Osaka.  It’s safe to say 2017 hasn’t been her year.

Upsets were the order of the day on the 4th day at the Billie Jean King National Tennis Centre. There were NINE, I repeat, nine upsets on this day. Upset victims included Grigor Dimitrov, Tomas Berdych, Caroline Wozniacki, Dominika Cibulkova and Svetlana Kuzanetsova. Perhaps the biggest upset of the day was Jo-Wilfried Tsonga’s defeat at the hands of Denis Shapovalov in primetime.

Nadal and Federer were also in action again. For the second match in a row, Feds went 5 sets, this time against veteran Russian Mikhail Youzhny. Rafa lost the first set in his match against Taro Daniel but stormed through the next three to win in four sets. Maria Sharapova continued her comeback ride with a straight sets victory over Hungary’s Timea Babos.

Day 5 was quiet one, at least as far as the upsets were concerned, but perhaps the best moment of the day was when it was revealed that Roger Federer was seen practicing in Central Park, alongside the denizens just trying to hit some balls around. It was definitely a feel-good moment. The biggest upset of the day was Marin Cilic falling to Argentinian Diego Schwartzman. 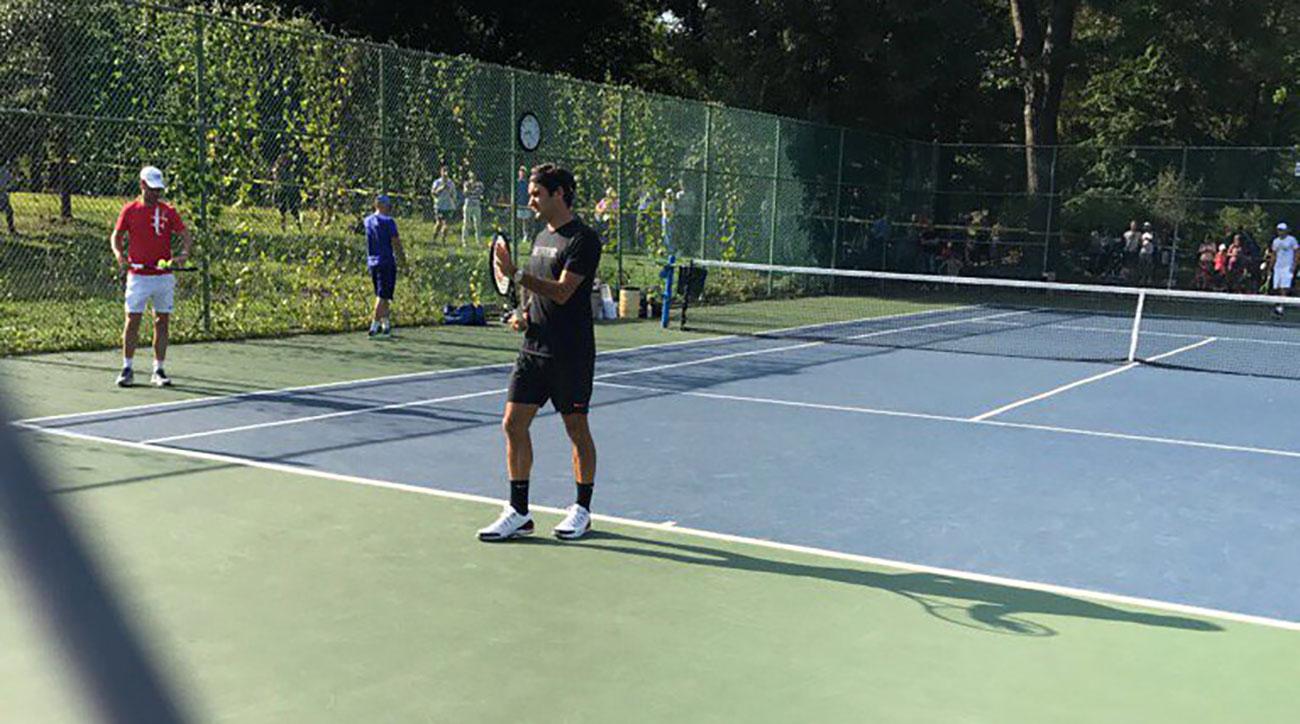 It was also today that Serena Williams gave birth to her daughter, prompting congratulatory messages on social media from the tennis world, including a humorous tweet from Garbiñe Muguruza: ‘A girl? I hope she doesn’t play tennis.’ Nevertheless, congratulations are in order for the Queen of Tennis. Auntie Venus on the other hand had a very straightforward, straight set win over Maria Sakkari. Denis Shapovalov scored another victory and a fan in John McEnroe, who is quite taken with the youngster who reminds him of, well, himself.

The most exciting thing that happened today was an unexpected but welcome return to form (his 2009 US Open champion form that is) of our gentleman friend Juan Martin del Potro. Although he was slapped with a warning for uttering profanities, which is not very gentlemanly of him, is it? I had forgotten how amazing his forehand is, which he used to great effect to batter Roberto Bautista Agut off the court. While this is, technically, an upset, it really shouldn’t be. Yes, del Potro is ranked 24th and Bautista 11th, but del Potro is a former champion, and the crowd know that. They were very vocal in their support of the Argentine and I’m pretty sure I saw someone wearing a Messi jersey and waving another one as a flag. Nonetheless, it was a good day for him.

It was not, however, a good day for Italian Fabio Fognini who was summarily kicked out of the tournament for his misogynistic rant at the chair umpire after his first round loss. Despite being ousted in the singles tourney, he was still competing in doubles and as a result of his dismissal, his doubles quarterfinal match is now forfeit. In addition, he was slapped with a $24, 000 fine. The chair umpires are now dealing out warning to any players heard uttering any form of obscenities, which included del Potro. (Even if he did proceed to glare daggers at the line judge who tattled on him. If looks could kill……)

On the women’s side, the surprise upset of the day was French Open champ Jelena Ostapenko being ousted in straight sets by unseeded Russian Daria Kasatkina. The commentators speculated that she might be suffering from an illness of some kind as it was reported that she had been feeling unwell before the match. She is one of the most exciting female players at the moment, so let us hope that she recovers soon.

This wraps up Part 1 of this US Open blog, stay tuned for Part 2. Until then, enjoy the rest of the tournament and, as always, like and follow SplitFocusSports for all your sports blogging needs.