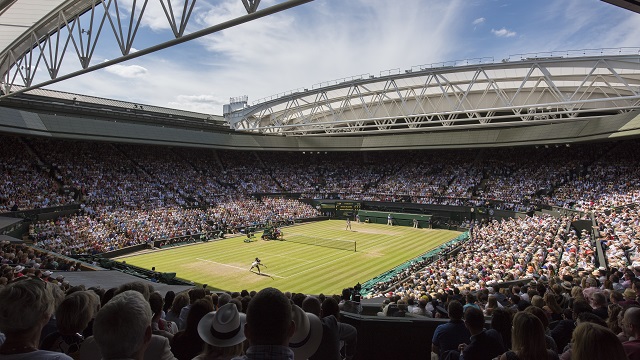 My first foray into tennis blogging (see my pieces on the recent French Open to jog your memory) was both enjoyable and therapeutic…………what better way to take out some sport-induced rage than to write about it? So here’s foray number 2: Wimbledon. Yes, tennis fans, its that time again! The long anticipated, much awaited and incredibly short grass court season, culminating in one of the most iconic sporting events on the calendar. That little tennis tournament down in SW19, where sometimes the rain comes and makes life miserable but also where spectacles happen- I’m thinking the longest tennis match in history where Nicolas Mahut and John Isner battled it out for three days in a mtach that lasted somewhere over 7 hours and the fifth set was won by a scored of 70-68. The fortnight of Wimbledon is quintessentially British (as are the vast quantities of strawberries and cream, Pimms and afternoon tea, naturally) and is the highlight of the tennis calendar for fans and players alike.

Many people will have a defining moment of Wimbledon and in the interest of full disclosure, I’ll have you know that mine is the 2008 Federer-Nadal final which went 5 sets over 5 hours through 3 rain delays (because the roof on Centre Court hadn’t been finished yet) until Nadal won his first Wimbledon title essentially in the dark at 9 pm GMT. Widely considered the greatest tennis match in the history of the game, and certainly the greatest Wimbledon final ever played, it has stayed with me over the last 9 years. Thanks to YouTube, I can watch highlights whenever I want.  I’ve included a link to the video: https://www.youtube.com/watch?v=-1yfWb0-jqQ

While indulging in a bit of reverie is allowed, I’ll spare you readers a lengthy spiel about this match- one day I may devote a whole article about it. Moving swiftly on to this year’s edition!

Surprising absolutely no-one, the top 4 men’s seeds are the Big Four: Murray, Djokovic, Nadal and Federer. Its almost like its 2010 again. Federer and Nadal’s comeback tour continues, Djokovic will be hoping to maintain his form and Murray will cling on to his number one ranking. The rest of the field will hope that they have an outside chance, but my money has these guys in the semis. And I’m not sure many people would complain about that. On the women’s side, once again, its anyone’s tournament, although if anyone stands out in this tournament its Venus Williams, but who knows. After her maiden Grand Slam victory in Paris, Jelena Ostapenko could surprise us all and make the final and win, but her rawness might be the only thing that prevents that. Maybe Angelique Kerber will win and maintain that no. 1 ranking or perhaps Simona Halep will finally live up to all that potential and win her first Slam after her heartbreaking defeat on the clay. As always, we will have to wait a fortnight to find out……….so brollies at the ready!

Let’s be honest, the first day of Wimbledon can, on occasion, be tremendously boring and reasonably straightforward with all those at the top of the draw making it through and those at the bottom, well, not. But every now and then high drama occurs on the expertly tended lawns of SW19. This year was one of those days: the first major upset. The victim? Stan Wawrinka. Several weeks removed from his straight-sets defeat at the hands of Rafa Nadal in Paris. a four-set loss to Russian Daniil Medvedev. Rumour has it that Stan the Man is nursing an injury. Here’s hoping he’s recovered for the US Open next month. 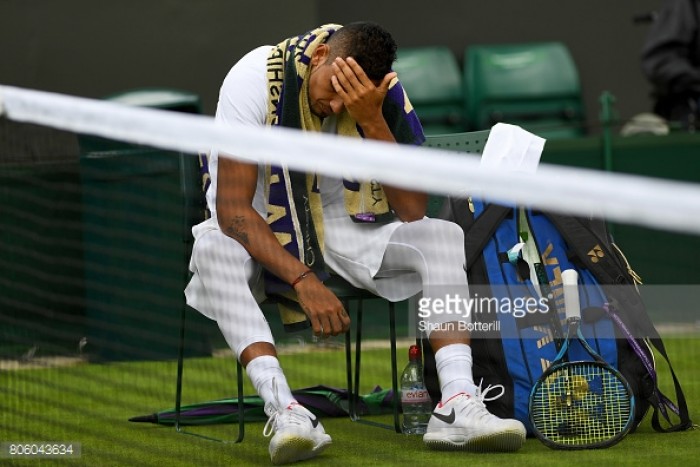 On the women’s side of the draw, it was very much business as usual. Victoria Azarenka, returning to competition after the birth of her son, scored a straight-set win over young American CiCi Bellis. Venus Williams, Johanna Konta, Petra Kvitova and Jelena Ostapenko also made it through to the second round with no disasters. Also making it through to round 2: Aljaz Bedene and Heather Watson.

Day was another easy day at the office for the top seeds. Novak Djokovic and Roger Federer didn’t really have to play as both their opponents, Martin Klizan and Alexandr Dolgopolov respectively, both retired due to injury. How very convenient. To be fair, it was very hot and humid in London on Day 2. Dominic Thiem and Milos Raonic made quick work of their opponents. On the women’s side, both Angelique Kerber and Karolina Pliskova made it to round two. There were, however, several upsets as usual.

The men took a ‘business as usual’ approach to proceedings on Day 3, while the women’s side was upset central. A total of 6 seeded players were ousted compared to one men’s seed. The most disappointing upset on the day was Petra Kvitova’s loss to unseeded Madison Brengle. It was clear that she was nursing an injury, other than her hand, obviously, and she was having difficulties gripping the racket. You may recall that she was upset in the second round at Roland Garros as well.  Rafa Nadal made everything look easy against Donald Young (again without dropping a set) while Andy Murray and Dustin Brown played an entertaining match on Centre Court, with Murray coming out on top. Johanna Konta and Donna Vekic played a three set thriller, which in the end, went to Konta, in a form of payback for her loss to Vekic a few weeks ago.

After the amount of upsets the day before, you would have thought that would be enough and things would go according to plan. But you would be mistaken. There were 7 upsets on the day- same number as Day 3- but at least on this day there would be a more even number on either side. Federer, Djokovic, Raonic and Thiem once again enjoyed a relatively easy day on the grass. The shocker on the women’s draw was third seed Karolina Pliskova going out at the hands of Slovakia’s Magdalena Rybarikova. But if Pliskova was having a bad day, it was nothing compared to the gruesome injury suffered by American Bethanie Mattek-Sands, who crumpled to the court in agony and screamed in pain- pretty sure there were some F-bombs in there. She was stretchered off and taken to hospital, where it was confirmed that she had a dislocated kneecap and ruptured patellar tendon. Anyone wanna say: OUCH. While not a particularly successful singles player, Mattek-Sands is an incredibly talented doubles player and together with her partner Lucie Safarova are the top-ranked women’s doubles side on the tour. They were also looking to win an (almost) calendar slam this year, so this is a disappointing injury indeed. Also in the upset category, our favourite gentleman friend, J. M. del Potro.

Today also marked the 9th anniversary of Federer and Nadal’s epic Wimbledon final that I (probably) mentioned in my introduction to this piece………..HAPPY ANNIVERSARY!

In addition to being Day 5 of the tournament, today also marked the 10th anniversary of the 7/7 bombings in London. David Beckham and Sergio Garcia (resplendent in his green Master jacket) graced the Royal Box. Murray and Nadal once again kicked behind on Centre Court. 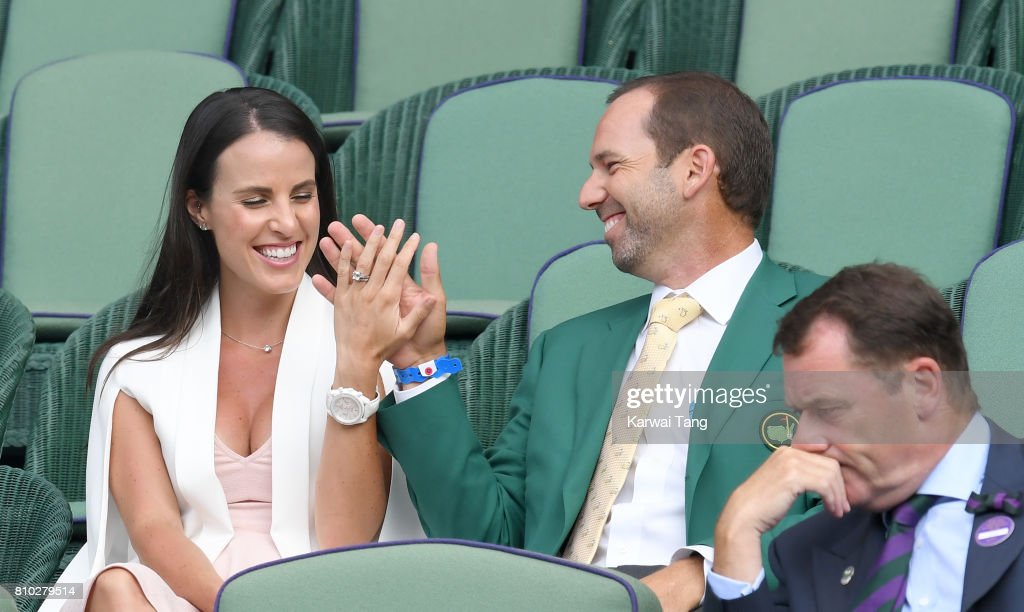 Once again, Nadal did not drop a set, bringing his total to 28 games without losing one.- althouugh that third set was stressful! This dates back to the clay court season. I mean, he’s a decent clay courter, right? Let’s be honest, grass is not Rafa’s favourite surface, although given the current condition of SW19’s lawns, it sure is playing a lot like clay. Most of the other players have already said this. Rafa presumably cares not a lot. Surely, if the grass is going to play like clay than it makes his life a whole lot easier. Fun fact of the day: Rafa only needs to make the finals at Wimbledon in order to retake the no. 1 ranking. Whether he wins said final is irrelevant. Kind of. I’m not sure that just making the final is good enough for him anyway: he’s definitely in it to win it in 2017.

It was, again, business as usual at Wimbledon. For the first time all week, none of the women’s seeds went the way of the upset, although Jo-Wilfried Tsonga and Gael Monfils weren’t so lucky. Monfils went out in a five-set thriller against his countryman Adrian Mannarino and Tsonga went out in five sets against 28th seed Sam Querrey in a match that was held over from yesterday due to darkness. He only played one game once on court. Sound like a familiar scenario? It is: you may recall that this happened to him several weeks ago at Roland Garros where he was upset by Renzo Olivo. Let’s just hope that history doesn’t repeat itself at the US Open. Because we all like Tsonga.

Today was Olympic and Paralympic Champions Day in the Royal Box. Spectators included: Jason & Laura Kenney, Nicola Adams, Adam Peaty, Helen Glover and some guy named Andy Murray on his day off. Must be nice when you’re invited into the Royal Box whilst also a competitor at the tournament and they make an exception and relax the dress code for you. But I suppose that’s what happens when you’re the defending Wimbledon champ and the two-time defending Olympic gold medallist.

Another upset worth mentioning was the Bryan brothers being eliminated from the men’s doubles tournament.

As Wimbledon enjoys its traditional Sunday off before the second week kicks off in earnest, here’s a look ahead at what lies ahead in week 2.

Now, that is what I call a good day of tennis. The Big Four in action, plus Raonic, Thiem, Berdych, Zverev and Dimitrov. There’s also 3 unseeded players- Paire, Anderson and Mannarino- still in the draw. As I’ve said before, I don’t make predictions, but if I was going to I wouldn’t bet against those 4 at the top.

The women’s side is stacked full of fun as well. Kerber and Kuznetsova will have tough matches as will Svitolina against Ostapenko, but will her rawness get the better of her is the question. Azarenka shouldn’t be counted out either; she could easily make Halep’s day very difficult if she’s on form; she is so far this tournament. Despite all the upsets this week, there’s only three unseeded players left in the draw: Azarenka, Rybarikova and Martic- those two are playing each other, which should be interesting.

Just another Manic Monday at Wimbledon, then!

But if, like me, you’re desperate for some sport on Sunday and because we’re all deprived of tennis, here’s some things you could watch instead:

Stay tuned for my Week 2 Round-up and Finals Weekend write-up! As always please like and follow SplitFocus Sports for all your sport blog needs.