Greece broke British hearts on Friday night in Leicester, with Ioannis Athinaiou draining a dagger three-pointer to snatch the win.

Great Britain kicked off World Cup Qualification in front of a sold-out crowd in the Leicester Arena hosting European powerhouse Greece, albeit, a Greek side without any Euroleague players.

Due to the ongoing feud between FIBA (the world governing body) and Euroleague (the top European competition) preventing players from the likes of Panathinaikos and Olympiakos being selected, new Greek coach Thanasis Skourtopoulos was forced to turn to the top Greek players not playing on the biggest European stage. Skourtopoulos made clear that tonight was the hardest part of the FIBA window thus far as his squad came together for the first time just three days ago.

Great Britain was able to select a strong squad with many returning players from Eurobasket in the summer, spearheaded by captain Kieron Achara, three-point shooting big Dan Clark and tireless point guard Teddy Okereafor. The combination of Okereafor and Andrew Lawrence, who earned his 50th cap during the game, was particularly lethal for Great Britain as New Head Coach Tony Garbelotto looks to instil a new way of playing on his debut.

The first half was a back and forth affair with the sides locked in a tie at the end of the first (17-17) and second quarters to head into the break 37 points apiece. Dan Clark started well for Great Britain, leading all scorers at the break with 10 points.

GB rushed into a seven-point lead early after the break but Greece pegged it back throughout the third quarter and at the start of the fourth they began to pull away from GB as the hosts got into foul trouble early. Greek never looked like missing from the stripe ending the night with an excellent 87% free throw percentage. Greece was tough in the paint with a monstrous performance from Greek captain and center Ioannis Bourousis, who finished on a game-high 27 points and 8 rebounds and demonstrated tenacity on defence with the pair of Charalampos Giannopoulos and Panagiotis Vasilopoulos. The duo was especially strong defending in the paint.

Okereafor and Lawrence were defensively terrific all night working hard on the high press, finishing the night with five and three steals respectively. As the Greeks built their lead it was the high defensive pressure forcing turnovers or causing steals which kept Great Britain in the game, when it looked like getting blown open by the visitors.

When Luke Nelson fouled out after giving up his fourth personal foul followed quickly by a technical the game looked gone for GB. Nelson had struggled to get in the game as pointed out by Garbelotto post game, which hurt GB’s chances of success as Nelson, since his debut against Greece in August, has become one of the stand out players for GB.

Greece had a comfortable ten point lead with just over one minutes to play in the fourth quarter but was down one of their defensive heavyweights as Vasilopoulos was receiving treatment for a bloody nose after going up against GB debutant Tarik Phillip. With Vasilopoulos out of the game, Great Britain had more breathing room and with 58 seconds to go, Phillip, on his debut, drained a three-pointer to get his first points in a GB shirt and close the gap to seven points. Giannopoulos nudged Greece’s lead back up to nine points when he made two of two free throws but a free throw from Phillip and Great Britain’s hustle earned them multiple chances. Lawrence took his chance scoring a two-pointer and draining the and-one for a foul to make the lead five points.

The unflappable Ioannis Bourousis had the chance to seal the game for Greece when he went to the line but incredibly he missed his second free throw and that gave GB a chance. Down six points with 24 seconds left on the clock. Gareth Murray tipped in a wide Dan Clark three-point effort to get the score to four points. On the inbound, Great Britain defended heroically keeping Greece pinned in their half of the court and that allowed Okereafor to intercept a pass and set up a dunk from Murray, the lead just two points.

With eight seconds to do Greece just had to hold the ball, but Lawrence was on hand once again to steal the ball from the opposition sprint down court and with three seconds on the clock pass to Phillip for the layup. TIE GAME. 0.1 Seconds on the clock and Great Britain had pulled off a miracle, they had sent the game into overtime.

In the extra period, Great Britain had made a great start, rushing out to a healthy lead with Murray netting five points and Ovie Soko, who played well on his return to the GB squad ending with 13 points, adding two. It wasn’t enough though for Great Britain as Greece made 3 three-pointers in the period. Ioannis Athinaiou draining the first to tie it at 86. The second three was from Captain Bourousis who coolly hit a three right in the face of the imposing Dan Clark to keep Greece within one point. Athinaiou had score two free throws to put Greece down by one point with a minute remaining.

In the final minute of play Great Britain failed to score which heaped the pressure back onto them and following a Dan Clark miss, Athinaiou had the final meaningful possession down by one. The cool-headed Greek point guard dribbled on the ball wide left and a few meters back from the three-point line, Okereafor thought he had done enough but Athinaiou hit an incredibly tough three-pointer to kill Great Britain. Athinaiou, who plays his club basketball for Aris in the Greek Basketball League, made a high-pressure shot, in a difficult position on the floor look like the simplest thing in the world. A testament to the strength of domestic basketball in Greece that will encourage the Greek fans and staff that even missing their stars Greece is able to win big games and perform in the big moments.

Garbelotto’s team had one final chance to grab the win down by two points, but the play he called didn’t come off properly and saw Greece regain possession and ultimately seal the victory.

For the Great Britain Head Coach, he doesn’t care who his team plays, to get so close and not get the win is unacceptable. “That’s a win GB has to convert. I don’t care who they turn up with, that is a win we’ve got to convert. I just hope it doesn’t hurt us in the future.” Great Britain’s players and coaches took the loss hard but will look to learn from the experience, Okereafor said after the game, “Every loss you try to learn from and be better another game. This is the road to China we’re on.” 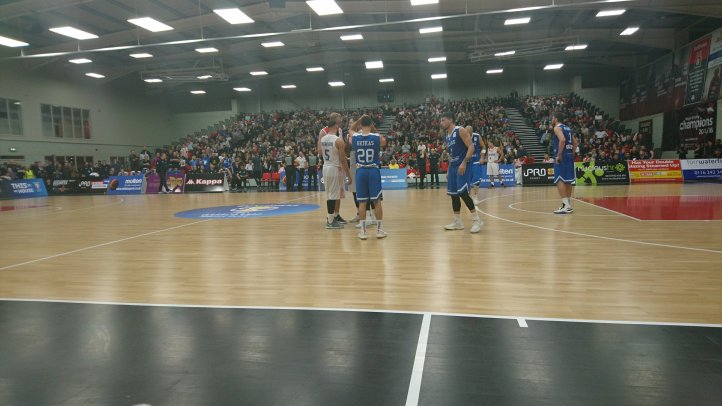 Garbelotto was full of praise for the performance of Okereafor, GB’s star man on the night. “I’m extremely proud of Teddy. I thought he played a tremendous game and I think his game is growing from Eurobasket.” He praised his team too, “I’m happy with how our guys are together. We’ve got a tight group committed to winning.” Garbelotto was quite clear what ultimately cost GB the victory, “Too many empty possessions and too much banging into the post when we need to keep the ball moving. Especially in the late third quarter and early fourth.”

It was a great night for basketball in Great Britain even if the scoreline doesn’t reflect that. Okereafor was enthused by the capacity crowd, “Great atmosphere on both sides and we appreciate them coming out and hope they can come to more games and I hope we can convert these into wins.”

Gareth Murray, who had a massive final seven minutes in the game from a points point of view had a strong night overall seeing meaningful minutes and creating a lot of problems for the Greek defenders. “[The loss] is a tough one to take, to be honest with you. To come back and to tie the game was pretty miraculous, but to lose. It was a tough shot at the end that the guy took to take the lead.” Talking about his very good performance he said “I felt like I played good defence and did what the coach asked me to do. Play hard, play smart, play team basketball and I happened to make some shots when it counts.” Looking forward Murray said “Defence is key to us winning games and keeping games close. We just have small details to take care of to finish games off.”

Greece travels to Estonia on Monday night to complete this window of Fiba basketball. Estonia was comfortably beaten by Israel 88-86 which will give Great Britain confidence. If Great Britain takes maximum points from their two Estonia games that will give them a great shot at qualification to the next round.

There was a lot of positives from Great Britain’s play against Greece. The new additions to the squad from Eurobasket played well and were lively. The improvement and development of Okereafor was pleasing to see as was the return of Myles Hesson and Ovie Soko, who took the role of the injured Gabe Olaseni. Great Britain needs to find more fluidity in their play, however, especially in the second half of a period, when things should be automatic at times they were anything but.

Greece faces a huge test in their next matchup against Israel on Monday in what will be a fascinating matchup. Greece must keep feeding Bourousis the ball in useful spots and keep the defensive tandem of Giannopoulos and Vasilopoulos together. If they are able to do that they will be in a very healthy position in the group come to the end of Monday.