Lions punch their ticket to the playoffs

The London Lions clinched their spot in the BBL playoffs with a 93-86 home win against the Newcastle Eagles, Wednesday night in the Olympic Park.

Wednesday’s win comes off a Sunday loss away to the Cheshire Phoenix. Following the loss, Navid Niktash was quoted in a daily star interview calling on his teammates to play the right way.

Navid’s certainly felt his message had an impact,  “I mean that was great, I said we had to play our way, our basketball, and that’s what we did.”

Rashad Hassan summed up the feelings of Lions fans and players after the win, “I feel great, we’ve been losing a few games lately and we just wanted to break that streak so to get a win tonight feels great.”

“And then it’s just pride.”

A source of concern for the Lions and their fans in recent weeks has been third quarter collapses. Against Newcastle, the players and coaches were determined not to let that happen.

Zaire Taylor credited the coaching of Nigel Lloyd as a big factor in the third against the Eagles,  “That’s one of the things we were focusing on, something we have identified. We took a different approach to it, strategy wise, and you’ve got to give Nigel credit for that.”

Niktash also focused on their third quarter efforts, “we had a great third quarter at the beginning … they came back but we stayed together, we bring some energy, everybody played well,”

“Everybody was together, nobody had their head down, nobody was negative, just a positive attitude today”

Taylor also had praise for the players making it work on the floor, “You’ve got to tip your hat to myself, Alex, Navid, all the guys on the floor executing what he (Lloyd) implemented for us to do. And then it’s just pride.”

Rashad Hassan, himself scoring a double-double with vital rebounds and scoring had this to say on the energy of Niktash, “you know it brought up big energy to the team and we followed behind that.” 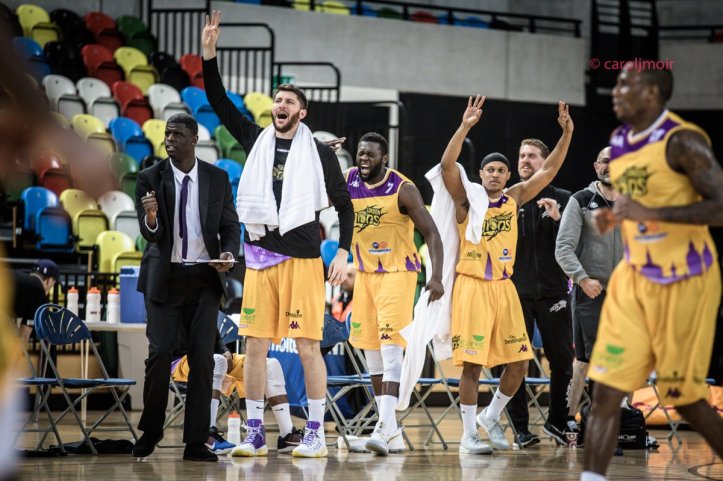 Attitude appeared to be a big focus in the lead up to the game for Coach Lloyd and his staff. Hassan said, “everybody was together, nobody had their head down, nobody was negative, just a positive attitude today”

Andre Lockhart on what it took to get the win, “I think deep down inside we knew what we had to do, we had a few practices, a few discussions and we just came to the conclusion and we just put our best foot forward.”

Game MVP Zaire Taylor was quick to credit the team effort. On his MVP award, “It’s always good to be appreciated. Alex got 14, and he was the low from the starting line up, Rashad got 18 so it was very balanced and I think it (MVP) could have gone either way.”

Determination and mental focus were the takeaways from Lions head coach Nigel Lloyd “it was going to be a matter of who gutsed it out in the end.” he continued “we were really mentally tuned in for the whole game and that’s what we needed to get this win today.” Taylor echoed his coach “We kept our focus when it counted”.

For owner Vince Macaulay the win was never in doubt,. “I expected us to win this game, all season long… the better teams in this league has not been our problem.” but focus needs to be maintained against Leeds if the Lions have any hope of winning in the playoffs “We’re travelling to Leeds on Sunday, who have  already beaten us, if we don’t win that game then I don’t see how we can expect to win the Championship”

For Taylor, the playoff picture is wide open. “This is the first time in the league I honestly think that any of the 8 teams that get to the playoffs can leave with the Championship.” Taylor is confident of their chances in the post seasons “we could beat anybody.”

Taylor on the importance of this game “these games are really important, it sets a tone, you get to learn things in terms of strategy of things, what to do and what not to do … and that’s huge.

The Lions have five games remaining, with road trips to Leeds and then Worcester where they will face the hottest team in the BBL. After that, the Lions will host the league champions Leicester Riders, Cheshire Phoenix and end the regular season with a trip to Glasgow.

The Lions have a massive opportunity to rack up some huge wins which will bolster confidence and improve their seedings for the playoffs. As Taylor says, The Lions feel like they can beat anybody, and when they play like did Wednesday it is hard not to agree with him.