Hello baseball fans and welcome to 3 Strikes! It’s canadianheartandmind here, pinch-hitting (pinch-writing, rather) for Aued’stouch, and here to bring you my 3 top moments from the last week around the big leagues.

This week saw 2 bench-clearing brawls in the same day- as only major league baseball can- some very very questionable happenings involving the fluffy white stuff (which if you ask me has no place in a respectable ballpark), the one and only Sister Jean throwing out the first pitch at the Cubs home opener (if you’re unfamiliar with Sister Jean, Google Loyola Chicago Ramblers and March Madness) and of course the renewal of the age-old, whatever-would-we-do-without-it Red Sox- Yankees rivalry. Yes indeed, it’s truly that time of year when the Sox and Yanks do what they do best; give us fireworks and quality ballgames. Which brings us to the main event. 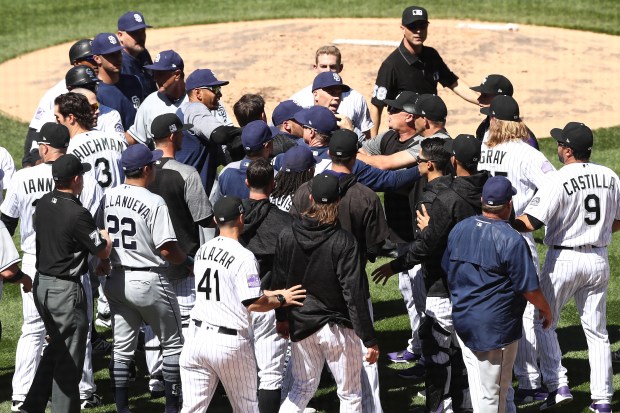 I realise my puns need work, but that notwithstanding, the Sox and Yankees got it on at Fenway on Wednesday night. These two teams have always been known to enjoy a good punch-up (lookin’ at you, 2004!) but they usually have the decency to wait a few months. At the end of this punch-up, reports claimed that up to 10 players would be fined or suspended by the league.

Things got heated early in the game after Yankees DH Tyler Austin slid hard into second and his spikes clipped Sox 2B Brock Holt. This led to a heated exchange after which the benches cleared-briefly.

Tensions reached a climax in the seventh inning with the Yankees leading 10-6. Sox reliever Joe Kelly, who had first thrown at Austin, then plunked him in the ribs on a 2-1 count. Austin threw his bat down and took 4 steps towards the mound, words were exchanged the benches cleared and, you know how this plays out. Yanks sluggers Aaron Judge and Giancarlo Stanton got in on the fracas, although how much of their efforts was help rather than genuine involvement is up for debate. 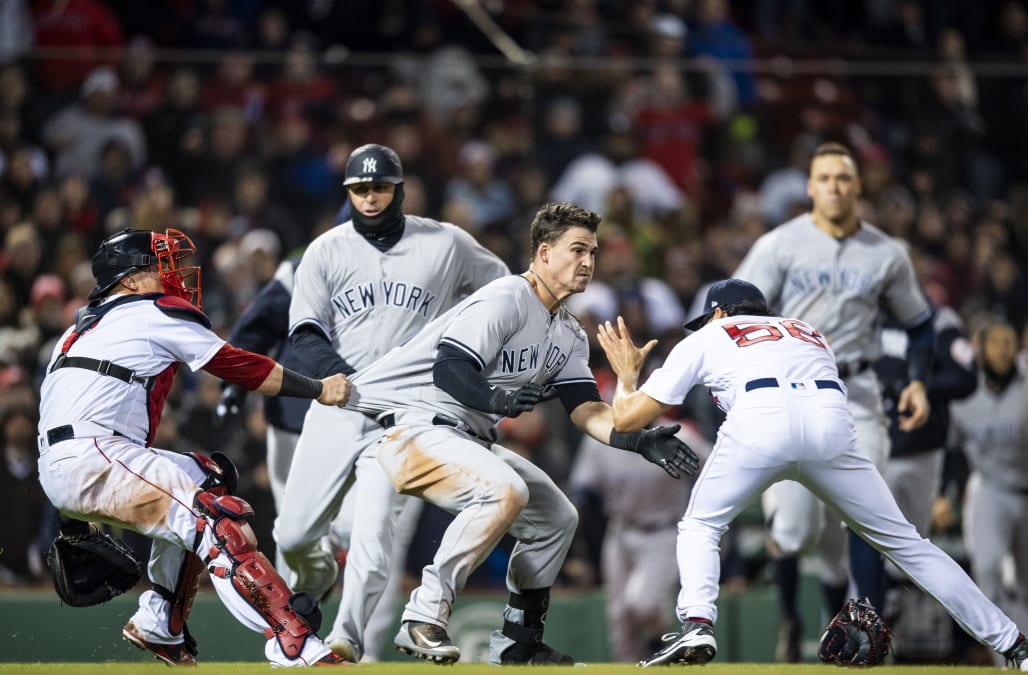 Cooler heads prevailed in the end and the Yanks would go on to win the game.

On Thursday, the league office meted out the punishments:

Sox manager Alex Cora and Yankees 3rd base coach Phil Nevin were also fined for their roles in the brawl as were CC Sabathia, Xander Bogaerts, Dustin Pedroia and Marco Hernandez (all 4 were fined on the basis that they entered the field of play while being on the DL). Both Kelly and Austin will appeal their suspensions and will be eligible to play until their appeals have been processed.

RUNNER-UP: Also participating in the game of base-brawl were the Padres and Rockies. The two teams engaged in their own bench-clearer earlier in the day after Padres reliever Luis Pedromo intentionally threw at the Rockies’ Nolan Arenado. Arenado charged the mound, Pedromo ran away and the benches cleared. Wa-hey.

Jays closer Roberto Osuna became the youngest closer ever to reach 100 saves at the tender age of 23. And no, I haven’t been going round all smug about it. Not really.

He reached the century mark on Tuesday, closing out the Jays’ 2-1 win over the Orioles in Baltimore. He’s also currently tied for third all-time in saves for the Jays (Tied with Billy Koch and behind Tom Henke with 217 and Duane Ward with 121).

The previous holder of this record was Francisco Rodriguez who reached 100 saves at the age of 24. As of writing, Osuna sits second in the American League with 5 saves, 1 behind Seattle’s Edwin Diaz (6). This also puts him in a 3 way tie for third in the majors. Currently, Osuna has averaged 35 saves over the last two seasons, meaning he could reach/surpass Duane Ward by season’s end if he can stay healthy and the Jays bats and defense give him enough to work with.

I make no bones about the fact that the MLB schedulemakers irk me, and have done since I was old enough to have an opinion. I maintain that they should know better than to schedule outdoor games in cold- weather climates, Chicago for instance. It’s perfectly fine if these teams played in an indoor/retractable roofed stadium, but they don’t. Nor do I condone scheduling day games in the middle of the work week when no-one can attend because of work/school commitments. You’re asking for the stadium’s virtually empty seats to make the news and the rounds on social media.

On Monday, the White Sox played the Rays in front of a grand total of 974 people. The paid attendance was around 10,000, but an actual turnout of less than that is………….well, not good. Apparently, Tuesday’s game was not better attended and to make things worse, the White Sox lost both of those games. I don’t blame the Chicago fans though. Granted, the Cubs were also playing a day game on the North side and that was better attended (I blame Sister Jean for that). 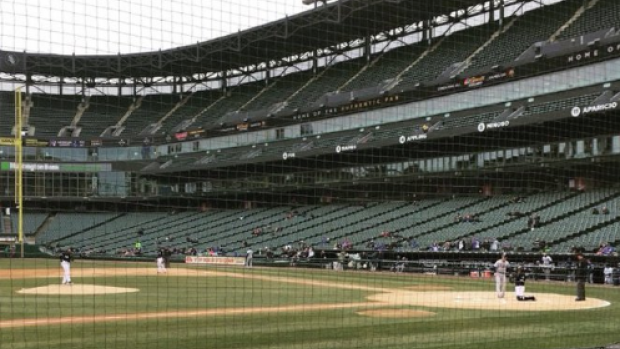 Also suffering attendance issues: the Marlins. They drew in 6,150 fans on Wednesday night. Their double A affiliate, the Jacksonville Jumbo Shrimp (who thinks of these names?) drew in 6, 960. For anyone who likes to do the math that’s a difference of 810. Apparently, 810 more Floridians preferred the Shrimp, and hot prospect Christian Yelich, that night. The Marlins attendance for their whole 3 game series against the Mets was 19, 669. 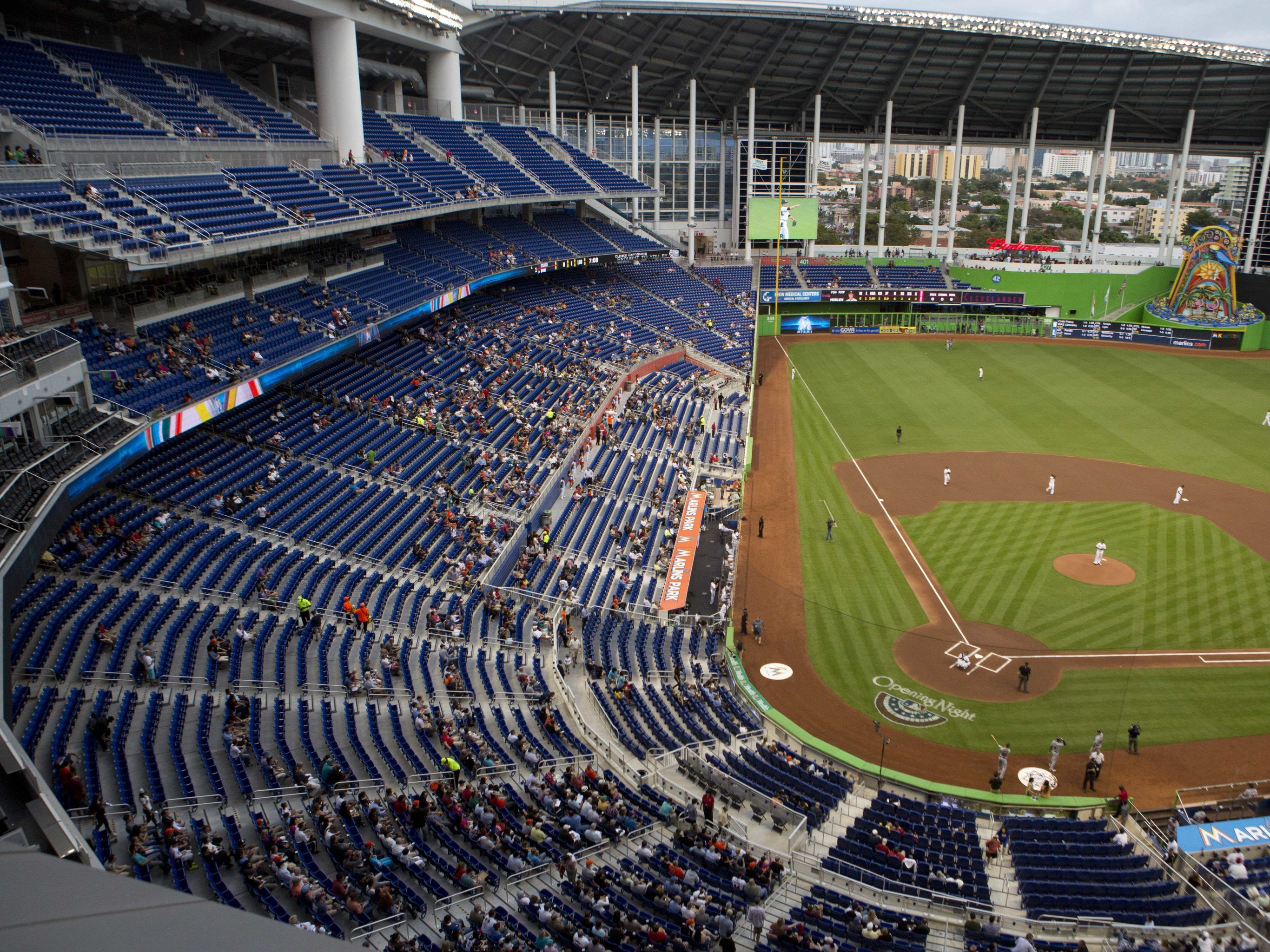 Here’s hoping that Marlins and White Sox fans have better things on the horizon to look forward to. Wishful thinking, probably.