The London Lions are the inaugural Betway All-Star Champions overcoming the Newcastle Eagles in the final by a scoreline of 26-25.

The Betway All-Star Championship is the first of its kind in Great Britain and pitted the top eight teams in British basketball against each other in 12-minute encounters of nonstop action. “It was Basketball Jim, but not as we know it!”

The Championship was a double elimination tournament, with matches lasting 12 minutes with the clock only stopping when the coach called a 30 second timeout. As well as the game clock being different the shot clock was reduced to 14 seconds, and in addition to the 3 point arc there was also a 5 point line which encouraged shots from downtown! The coaches had several decisions to make throughout the game, if and when to call a timeout, when and who to roll on and off the floor and when to press the Golden Buzzer which would start a two-minute power play. The power play gave that team double points for the two minutes, and prevented the opposition coach from playing their power play until theirs had ended.

Players, coaches and officials weren’t entirely sure what to expect from the day, but by the time the first game ended everyone had a much clearer idea about how the new rules would impact work and as soon as game two coaches were experimenting with strategy. The five-point line was a temptation for a number of players, speaking to some before the championship they were looking at shooting fives off the bat.

The Lions and the Eagles played excellent basketball all day and may not have been everybody’s first guess at who would be finalists but they were certainly the best two teams in the competition. The semi-finals were London Lions vs Bristol Flyers and a repeat of the playoff final Leicester Riders vs Newcastle Eagles. The teams eliminated in the round previous were Worcester Wolves, Surrey Scorchers, Sheffield Sharks and Glasgow Rocks. The Scorchers and Sharks gave decent accounts of themselves today and the Wolves and Rocks on another day could have expected to go further in the competition, as far as this is indicative of how they’ll play in the regular season, no fan base should be concerned.

The Championship was a day to exhibit the new squads, managers and uniforms of the BBL, a chance for fans to see some of the best teams in the country beat the heck out of each other in 12 minute slugfests and enjoy what felt like a festival of basketball. The players and coaches had a tremendous camaraderie, opposition coaches and players were sat with one another chatting about their summers, about the upcoming season and about just what the hell the rules are for powerplays late in the frame.

The first semi final between the Lions and the Flyers was, as most the games were, a high paced end to end slugfest. Bristol’s Brandon Boggs and Daniel Edozie had been largely unplayable in their earlier matches and looked dangerous against the Lions who were spearheaded by new point guard Justin Robinson and their “silent hero” center Brandon Peel. The game was a back and forth affair full of excitement and drama. A portion of the drama came with the Lions’ not hitting the buzzer in time and being forced to play the full 12 minutes without using their powerplay. The Flyers’ coach Andreas Kapoulas hit the buzzer at such a time that prevented the Lions from using theirs, preventing the double points period. That the Lions still won the game is testament to the maturity of their play and the organisation of their new coach Mariusz Karol, “I told them to just play regular twelve minutes, nothing more.  I knew people get crazy about the rules, you saw what they did, they didn’t play tactics they didn’t play rules. Play normal, win by one point.”

The second semi-final was the playoff final rematch between the Riders and Eagles. It was a tense game which went to wire, Paige’s two point shot giving the Eagles the lead with 1 second on the clock before Paternostro called for the timeout. This gave the Riders one second and an inbound in the Eagles’ half. The ball was inbound to  Bernardini, the club captain who is known for clutch shooting, in the corner but his three-point effort was just long and Newcastle were headed to the final. The game was also notable for the Eagles draining a ten point shot, with their coaches hitting the buzzer just before a five-point shot dropped.

The final between the Lions and the Eagles was, fittingly, the best game played at the championship. Like the semi-finals, it was a constant back and forth affair with both sides giving their all. The compressed nature of the game meant that every single point counted and that called for exceptional efforts, especially on defence. Coach Karol told his players they’d have to defend “three times as hard” on the powerplays, such was their importance to the games.

The Eagles drew first blood, with Paige, who had played well in every game, bagging the opening points of the contest. Latinovic, a summer addition for the new look Lions, drained a 3 on the next trip up the court to give his side the lead. A little back and forth developed before the Eagles blew the score wide open with a back to back three pointers from Paige, the second counting for double as the Newcastle bench hit the Golden Buzzer as the shot went down. With a 14-5 advantage and the best part of 2 minutes on the powerplay coming up the Eagles could be forgiven for feeling confident.

The Lions though battled back and good play from Flannigan and Peel had the Lions to within 5 before the Lions drained a 6 pointer on the buzzer of their own to take a 15-14 lead. The Lions stretched their lead when Paul Guede latched onto a Justin Robinson steal for a nice 4 point layup to make it 19-14. The Eagles got the game back to within a point through Darius Defoe and then took the lead with just minutes to spare. That was enough for Coach Karol who sent on the experienced point guard and lock down defender Andre Lockhart who tightened up the Lions defence whilst still maintaining good options going forward. 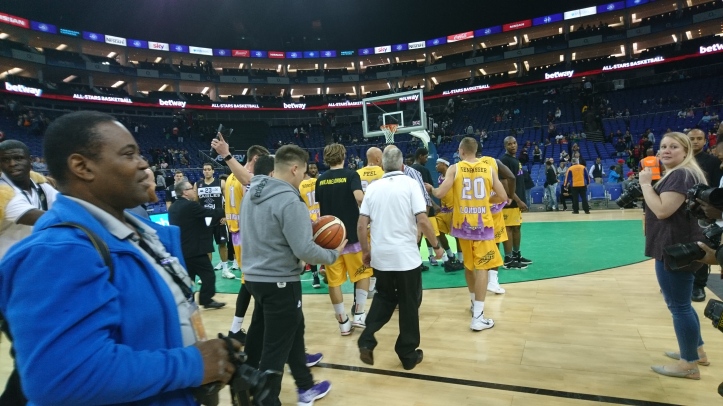 Peel went off with just minutes left draining two long twos to give the Lions a four-point lead, before Hall finished a Peel miss to make it 25-20. In the final minute and the Lions up 26-20 (one point was awarded for fouls) Hall spectacularly blocked Paige, but Paige still had time in the dying moments to drain a 5 pointer to get the Eagles to within a point. In the end though, it was too little too late as the Lions players and staff rushed the floor and celebrated wildly knowing they’d picked up their first silverware of the season and a cheque for £25,000.

There were some interesting scenes in the aftermath as some individuals from both sides exchanged words, but this was quickly calmed down and those in question looked to talk things over just moments later.

The Lions players and staff are rightly excited and proud of their achievement. They, led by MVP Justin Robinson, played fantastic team oriented fundamentals driven basketball. The Lions were not overcome by the need to shoot five pointers or lost their minds when they were worked out of a power play in the semi-final, they were just able to play their normal game and it saw them to victory.

How much we can read into the Championship is very much up to individuals. One could look at this as a bit of fun, a gimmick not to be taken too seriously. Others could look at it as an opportunity to scout individual players, more so than getting an idea of how strong teams will, and others still may form their opinions of who are contenders off the back of this. 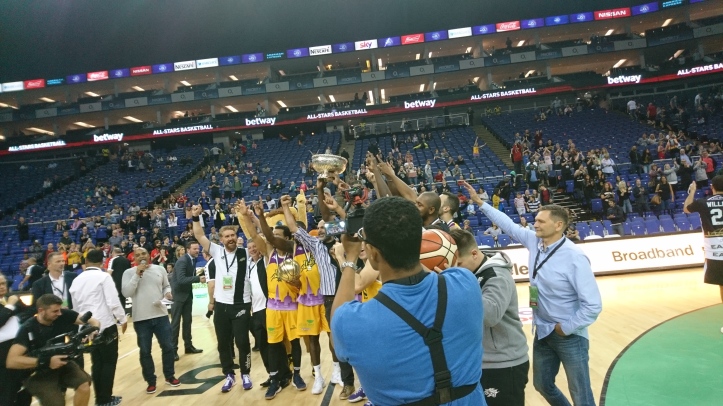 The four sides who made the semifinals all played fantastic basketball, and will surely be forces to be reckoned with. However, the other four sides who didn’t make the semis, and the four teams not represented at the event also should not be written off before the season has begun.

The Lions will enter the season with a little extra spring in their step after their victory, but they also enter with a little more of a target on their back, they’ve sent out a statement in how they won this championship and they can bet that they’ll get everyone’s best game.